Lots of excitement there was about a surprising discovery. And then… Paul Raeburn, writing in the Knight Science Journalism Tracker, was one of the people who kicked that discovery in the knee, rendering it limp: 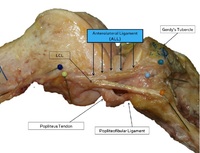 It was startling news, but an easy story to write: Scientists have discovered a new body part! Amazing, isn’t it, that something could have eluded us since the time of Hippocrates?

Well, it would be amazing, except for one little detail, a detail so trivial I’m embarrassed to bring it up: It isn’t true.

But, hey, it’s an unusually warm Thursday in New York, I’m feeling good about life, so let’s give the journalists who bungled this story a break.

Why? Because in order to discover that the story wasn’t true, they would have had to dig down all the way to the very first line of the study’s abstract, which says, “In 1879, the French surgeon Segond described the existence of a ‘pearly, resistant, fibrous band’ at the anterolateral aspect of the human knee…”

That’s the body part in question, as journalists who even glanced at the abstract would have known. The darn thing was discovered 134 years ago.…