Do you pant with excitement to learn which scholar is the most very smartest and/or most very most influential?

If you do, then try using the Scholarometer. An article in Nature magazine describes the excitement that drives the people who wrote the software that delivers the numbers:

Who is the best scientist of them all? 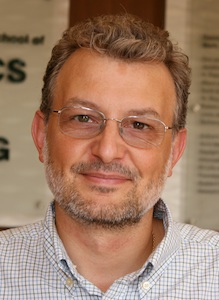 Is theoretical physicist Ed Witten more influential in his field than the biologist Solomon Snyder is among life scientists? And how do their records of scholarly impact measure up against those of past greats such as Karl Marx among historians and economists, or Sigmund Freud among psychologists?…

[R]esearchers at Indiana University Bloomington think that they have worked out the best way [to calculate rankings across disciplines]….Their provisional (and constantly updated) ranking of nearly 35,000 researchers relies on queries made through Google Scholar to normalize the popular metric known as the h-index (a scientist with an h-index of 20 has published at least 20 papers with at least 20 citations each, so the measure takes into account quantity and popularity of research)….

The [rankings appear] on the website Scholarometer, developed by Filippo Menczer [pictured here], an informatician at Indiana University Bloomington, and his colleagues Jasleen Kaur and Filippo Radicchi.

“We think there is a hunger for this…,” says Menczer.

(Thanks to investigator Hal Vance for bringing this to our attention.)

BONUS (possibly unrelated): Whatever happened to Paint by Numbers?: