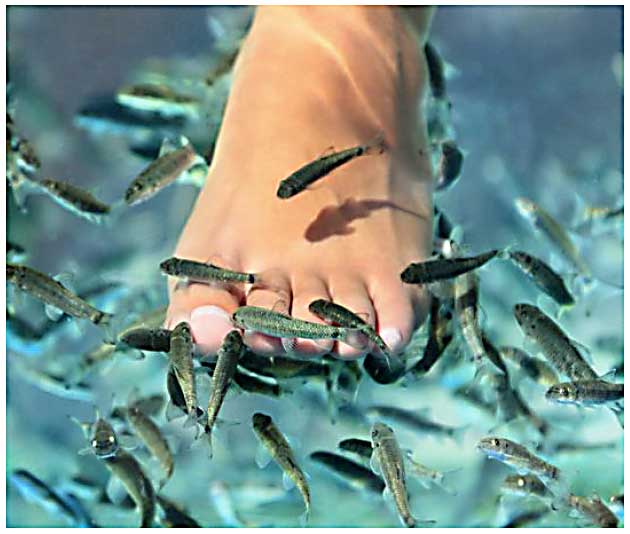 “A fish pedicure is the process in which the user places their feet in a tank of water (which may be for individual use or shared) to mid-calf level and Garra rufa fish preferentially ‘nibble’ the thickened skin from the feet, usually for between 15 to 30 minutes.”

The definition (and the photo) comes from an August 2011 report from the UK Govt.’s Health Protection Agency (HPA), which evaluated the pros and cons of having one’s feet nibbled. The report found that :

“On the basis of the evidence identified and the consensus view of experts, the risk of infection as a result of a fish pedicure is likely to be very low, but cannot be completely excluded.”

The document provided a caution however :

But what, exactly, are ‘Chin Chin’ fish? Despite more than two years of partial endeavour, Improbable has had almost no success in finding a verifiable scientific identification of the species.  Some (such as the HPA) imply that the nefarious Chin Chin fish might be a type of carp, whilst other www chatter asserts that it could be a variant of Tilapia.

In the public interest, with fish foot massage safety issues in mind, can any ichthyologists finally resolve the Chin Chin mystery for us?