What time is it? That simple question gains new meaning in this study:

“The Morning Morality Effect: The Influence of Time of Day on Unethical Behavior,” Maryam Kouchaki [pictured here] and Isaac H. Smith, Psychological Science, epub October 28, 2013. (Thanks to investigator Cheryl Isley for bringing this to our attention.) The authors, at Harvard University and the University of Utah, explain: 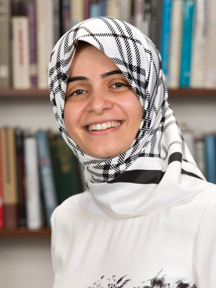 “Are people more moral in the morning than in the afternoon? We propose that the normal, unremarkable experiences associated with everyday living can deplete one’s capacity to resist moral temptations. In a series of four experiments, both undergraduate students and a sample of U.S. adults engaged in less unethical behavior (e.g., less lying and cheating) on tasks performed in the morning than on the same tasks performed in the afternoon. This morning morality effect was mediated by decreases in moral awareness and self-control in the afternoon. Furthermore, the effect of time of day on unethical behavior was found to be stronger for people with a lower propensity to morally disengage. These findings highlight a simple yet pervasive factor (i.e., the time of day) that has important implications for moral behavior.”