This is possibly not the only study that focuses on a non-criminal student sample. It is one of the few that relies on both the Iowa Gambling Task and Sniffin’ Sticks: 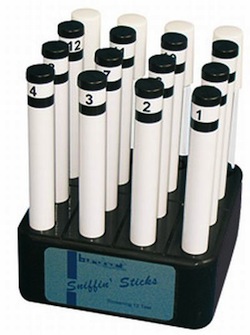 “This study investigated the relationship between psychopathy and tests presumed sensitive to orbitofrontal cortex (OFC) function in a non-criminal student sample. While converging lines of evidence indicate OFC-associated dysfunction in criminal psychopaths, few studies have investigated whether non-criminal psychopaths manifest similar deficits. Psychopathic traits were indexed using the Self-Report Psychopathy scale and the “Sniffin’ Sticks” and Iowa Gambling Task (IGT) were employed as neuropsychological measures of OFC function. The results showed higher degrees of psychopathy were significantly associated with poorer olfactory discriminative ability and poorer IGT performance. The discussion focuses on what these findings contribute to the understanding of the psychopathy and OFC relationship, suggesting the degree of OFC-associated dysfunction may be one differentiating factor between criminal and non-criminal psychopaths.”