This photo from General Electric shows a Nobel Prize winner and an eventual Ig Nobel Prize winner working together. GE describes it: “Thinking Outside the Cold Box: How a Nobel Prize Winner and Kurt Vonnegut’s Brother Made the Clouds Snow at GE in the 1940s… Irving Langmuir, Bernard Vonnegut, and Vincent Schaefer are seeding a cloud to make snow.”

Irving Langmuir was awarded a Nobel Prize in chemistry, in 1932. Bernard Vonnegut was posthumously awarded an Ig Nobel Prize in physics, in 1997 (which was accepted on his behalf by his sons, who took part in that year’s Ig Nobel ceremony). 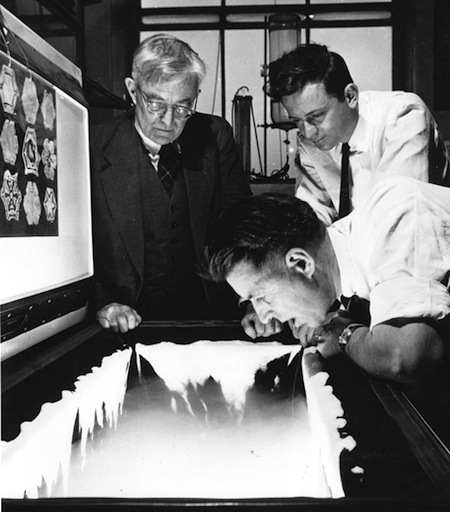 Io9 describes Langmuir as “The Real-Life Scientist Who Inspired Kurt Vonnegut’s Cat’s Cradle“; other accounts suggest that brother Bernie may have been as much, perhaps even more, the model for that character.

Here’s video of Vincent Schaefer, the third man in that photo, making snow:

[Thanks to Jennifer Ouellette for inspiring this item.]