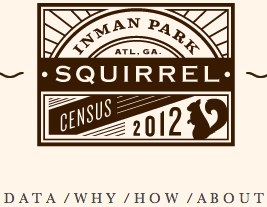 Amateur scientists in Atlanta Georgia devised their own methods for counting squirrels (thanks to investigator Amy Baxter for bringing this to our attention.) They write:

In the spring of 2012, a statistical count was made of the Eastern gray squirrel (Sciurus carolinensis) for the neighborhood of Inman Park in Atlanta, GA. The Inman Park Squirrel Census (IPSC) was managed by a part-time, unpaid staff from various professional backgrounds – two writers, two designers, a web programmer/artist, a postdoctoral research associate, a Ph.D. candidate, and a wildfire fighter. Extra volunteers assisted in the counting. The findings are presented here in a series of maps, data, and other tidbits…. 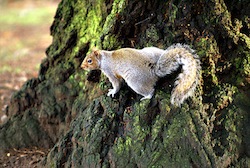 Scientists have tackled this question, and published studies that might be helpful to anyone who wants to know how to solve the problems. Here are three of those reports:

Squirrels dwell only in some countries. Where there are no squirrels, one can perhaps find a local equivalent. Australians, for example, have wallabies. Here is one of the scientific studies about how to count wallabies: