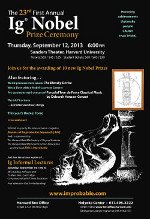 Webcast of the Ceremony

The ceremony will be webcast live here on the improbable web site, at www.improbablecom.wpcomstaging.com/ig/2013/

The webcast will also appear be available on other web sites. Here are some of them:

This year we will also be sending out a second, parallel live webcast, the NSA Courtesy Cam, offered to the NSA, MI5, and the world’s other security agencies as a courtesy. It will show a behind-the-scene view of the ceremony. You can access that feed at http://www.youtube.com/watch?v=zeNdy_gsfE8

Webcast-watching parties are happening in Paris, Atlanta, Raleigh, and other places. (And two days from now, on Saturday night, there’s a big event in Leiden)

(And on Saturday: The Ig Informal Lectures)

Two days after the ceremony, on Saturday afternoon, Sept 14, The Ig Informal Lectures happen, at MIT. Please come be part of that!