Red is a color pertaining to the subject of this study:

“The Effect of the Color Red on Consuming Food Does Not Depend on Achromatic (Michelson) Contrast and extends to Rubbing Cream on the Skin,” Nicola Bruno [pictured here], Margherita Martani, Claudia Corsini, Claudio Oleari, Appetite, August 31, 2013. (Thanks to investigator Neil Martin for bringing this to our attention.) The authors, at the Università di Parma, Italy, explain:

“Recent literature suggests that individuals may consume less food when this is served on red plates. We explored this intriguing effect in three experiments. Independent groups of participants were presented with constant amounts of popcorns, chocolate chips, or moisturizing cream, on red, blue, or white plates. They were asked to sample the foods (by tasting them) or the cream (by rubbing it on the hand and forearm) as they wished and to complete mock ‘sensory analysis’ questionnaires. Results confirmed that red plates reduce taste-related consumption and extended this effect to the touch-related consumption of moisturizing cream. Suggesting that the effect was not due to a decrease in the consciously experienced appeal of products on red plates, overall appreciation of the foods or cream did not differ according to plate color. After careful photometric measures of the materials used for each food-plate pairing, we determined that food and cream consumption was not predicted by Michelson (achromatic) contrast. Although the origin of the intriguing effect of the color red on consumption remains unclear, our results may prove useful to future potential explanations.” 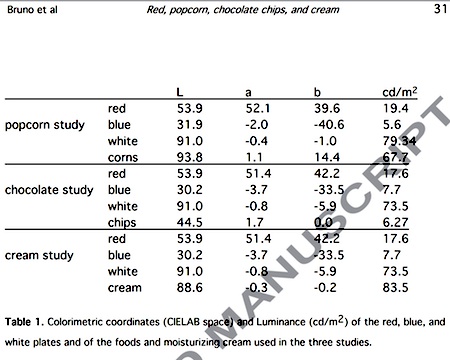