Professor John Mainstone, co-winner of the 2005 Ig Nobel Prize for physics, has died. That prize was awarded to

John Mainstone and the late Thomas Parnell of the University of Queensland, Australia, for patiently conducting an experiment that began in the year 1927 — in which a glob of congealed black tar has been slowly, slowly dripping through a funnel, at a rate of approximately one drop every nine years. [REFERENCE: “The Pitch Drop Experiment,” R. Edgeworth, B.J. Dalton and T. Parnell, European Journal of Physics, 1984, pp. 198-200.]

Our deep sympathy goes to his family and many friends. We met Professor Mainstone only once, when he took part in the Ig Nobel Prize ceremony (see photo below). He was a friendly and delightful man. 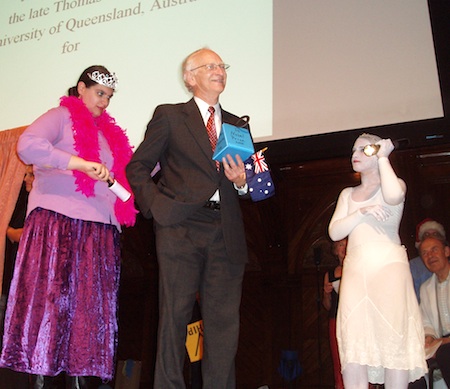 Here are some of the many news reports about Professor Mainstone’s passing:

Professor Mainstone took his duties simultaneously seriously and with a deep, happy appreciation of their oddities. Each year, we ask the new Ig Nobel winners to keep their status secret until the moment they are introduced on stage at the ceremony. Professor Mainstone was scrupulous about that. His wife accompanied him in traveling half way around the world from their home in Australia to the ceremony at Harvard University in the US. It was only at the moment the airplane touched ground in Boston that Professor Mainstone told his wife why they were making that long journey.

Here is a photo, supplied by the University of Queensland, of Professor Mainstone watching the pitch drop experiment in what some would call action: 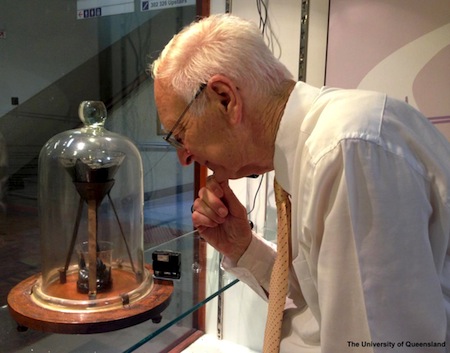 Ps. Just recently, the world — and Professor Mainstone in particular — became aware that a second, similar, pitch drop experiment was being conducted in Dublin, Ireland. That second experiment, begin in 1944 and still progressing, almost certainly was begun in imitation and admiration of the Australian pitch drop experiment.