DANVERS — State health officials continue to quietly investigate what may have caused one to two dozen students to exhibit unexplained vocal tics or repetitive hiccups at Essex Agricultural and Technical School in Danvers, and to a lesser extent, North Shore Technical High in Middleton, this past school year.

The state is reaching out to more than 2,600 doctors in the region while investigating environmental factors that may have caused the symptoms, including air testing and visual observations inside school buildings. So far, according to a May 10 status report from the state Department of Public Health, air tests did not turn up anything that would contribute to “significant neurological effects”….

(Thanks to investigator Ivan Oransky for alerting us to this.) The photo below shows Dr. Fesmire delivering his acceptance speech at the Ig Nobel Prize ceremony in 2006. Photo: Alexey Eliseev.) 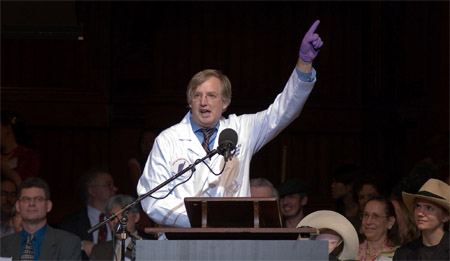