Following our Improbable article on ‘Laughter at the Supreme Court‘, we turn now to the implications of ‘Filled Pauses’ at the same institution. A Filled Pause (FP) can be uhm, ah, uh, &etc. The questions are: how often do they crop up, and which of the court’s Justices make the most use of them? And, perhaps more importantly, is there a relation between the number of uhms (&etc) and the final decision of the Justice in the case? 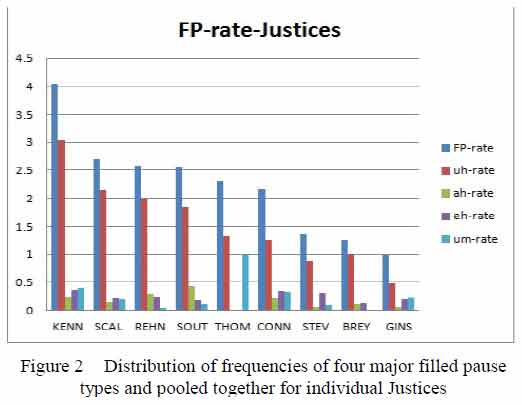 These questions have been answered in a report from researchers at Constantine the Philosopher University in Nitra, Slovakia, in association with The Institute of Informatics, Slovak Academy of Sciences, Bratislava, Slovakia and with support from the Department of Computer Science at Columbia University, US. The team examined recorded audio data from the 2001 sessions of the US Supreme Court. A chart was produced (above) which graphically displayed the uh-rate, the ah-rate, the eh-rate the um-rate (and the total Filled Pause rate) for each of nine Justices during their conversations with lawyers. (As can be seen, Justice Kennedy had the highest FP score, and Justice Ginsburg the lowest). But did the FP content affect the outcomes of the case?

Perhaps future work may provide explanations for the found effect?

‘Entrainment in spontaneous speech: the case of filled pauses in Supreme Court hearings’ Proceedings of the 3rd IEEE Conference on Cognitive Infocommunications 2012.