This study explains gambling in a way no other study has managed. We believe this paper features the first appearance — anywhere, ever — of the phrase “an analysis of the foot wager of the Sphinx“: 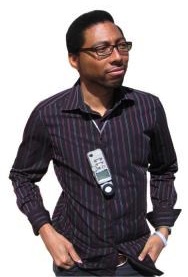 “Souls/Soles of Signs — Tell Totems and the Sphinx Wager,” Darryl A. Smith [pictured here], University of Nevada, Las Vegas, Center for Gaming Research Occasional Paper Series #13, January 2012. The paper identifies its author in these words: “Darryl A. Smith, M.Div., Ph.D., is an Assistant Professor of Religious Studies at Pomona College and Affiliate of the Intercollegiate Department of Africa.”

The paper begins with this summary of itself:

“ABSTRACT: This paper develops a philosophy of play through an analysis of the foot wager of the Sphinx. Applying a construction of the cosmology of Plato along with a Socratic etymology of her riddle’s answer, it provides a reading of Sphingian contestation consistent with contemporary practices of deception found in modern games like poker. I argue that such deception is constitutive of the excessive illumination of signaling tells in games and that such excess, in turn, is indicative in allied political contexts of a covetous and acquisitive obsession with light. This theory makes use also of Ralph Ellison’s refiguring of Oedipal play as a theory of tyranny and serves as a riposte to the psychoanalytic idea of the Oedipus complex.”