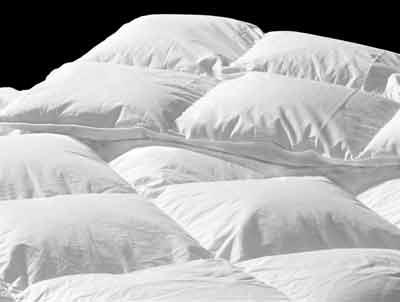 If you were compiling a compendium of everyday household items which can pose a danger, stepladders, drain-cleaning chemicals, and hot saucepans might immediately spring to mind. Feather duvets would quite probably be considerably further down the list.
But don’t be lulled into a false sense of security by their lightweight, soft and fluffy demeanour –  they can be hazardous.

“A 71-year-old woman complained of exertional dyspnea. She used the down quilt in last 3 winter seasons. She was diagnosed as hypersensitive pneumonia, and it was improved by corticosteroid administration. However, it recurred by the use of the down quilt. Lymphocyte proliferation assay using the BALF cells was positive. In the environmental provocation test, only down quilt was positive. From them, she was diagnosed bird fancier’s lung induced by down quilt. By the administration of methylprednisolone and prednisolone, pulmonary function and laboratory findings were improved obviously.”