Tomorrow Professor John Trinkaus — New York City’s most efficiently irritable man — will give his last lecture at the Zicklin School of Business, where he has taught for fifty years.

86 of Professor Trinkaus’s publications are listed in “Trinkaus — An Informal Look,” Annals of Improbable Research, vol. 9, no. 3, May/Jun 2003. The photo below shows Professor Trinkaus at the Ig Nobel Prize ceremony at Harvard, expressing his irritation: 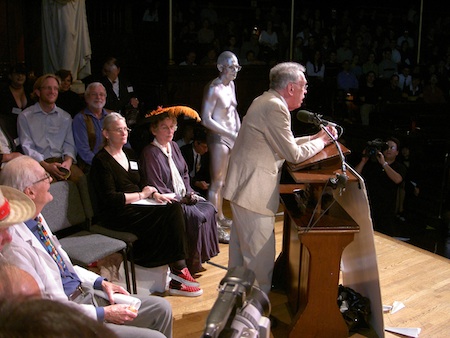 BONUS: Professor Trinkaus’s entire body of annoyed research was donated (by me) to The Museum of Curiosity