Some people achieve fame, then live so long that the fame fades and their eventual death goes largely unremarked upon. Those people are not the subjects of this new study:

“Death in The New York Times: the price of fame is a faster flame,” C.R. Epstein and R.J. Epstein, QJM, epub 2013. (Thanks to kiltish nvestigator Erwin Kompanje for bringing this to our attention.) The authors, at the University of Queensland and St Vincent’s Hospital in Sydney, Australia, report:

Aim: Based on the premiss that an obituary in The New York Times (NYT) tends to imply success in one’s vocation, we used NYT obituary data to elucidate the relationships between career success, terminal disease frequency and longevity.

Design: One thousand consecutive obituaries published in NYT over the period 2009–11 were analysed in terms of gender, occupation and terminal disease, as attributed.

Methods: The frequency of disease for each occupational category was determined, and the mean age of death was calculated for each disease and occupational subgroup.

Conclusion: Fame and achievement in performance-related careers may be earned at the cost of a shorter life expectancy. In such careers, smoking and other risk behaviours may be either causes or effects of success and/or early death.

Some detail from the study: 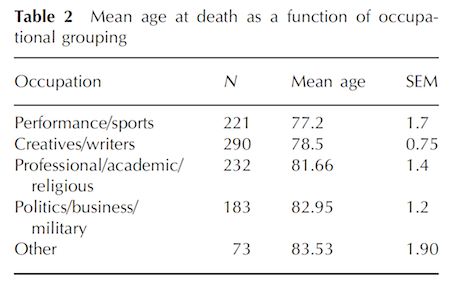