“Major discoveries always come with a story: Newton had his apple, Archimedes had his bath tub, and Dr. Frank E. Fish, while shopping for a gift, examined a sculpture of a humpback whale in a shop and issued a fatefully inaccurate observation: ‘Look at that. The sculptor put the bumps on the wrong side of the flipper.’ “ 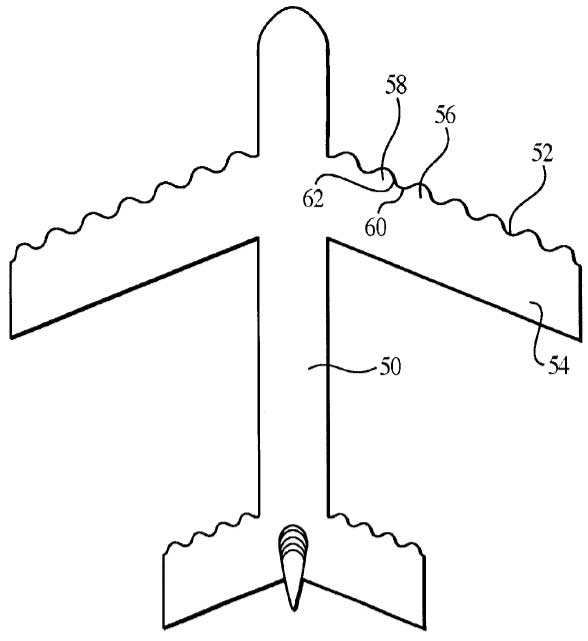 Continuing thoughts about the whales’ scalloped flukes led directly to a patent, which was granted back in Aug. 2002 to Dr. Frank E. Fish and Dr. Philip Watts for their ‘Scalloped Wing Leading Edge‘.  Experiments had shown that the bumpy front edges appreciably reduced hydrodynamic drag. (Our informed readers won’t jump to conclusions of Nominative Determinism [ND] , knowing of course that a whale is not a fish, but a mammal. But Dr. Fish does work with manta rays though the rays in question are robotic, not fish – as explained in a Westchester University press-release.)

Although there are as yet no production aircraft flying with the above design, Dr. Fish’s and Dr. Watts’ patent has resulted in a spinoff business called WhalePower which exploits the bumpy aerofoil technique in the leading edges of blades for wind turbines intended to generate electricity more efficiently. Perhaps a better candidate for ND, though martinets might point out that the Scottish inventor’s name had no trailing ‘S’ (that’s Watt, not Watts)