Many strands of thought weave together in this study:

“The ‘Wow! signal’ of the terrestrial genetic code,” Vladimir I. shCherbak, Maxim A. Makukov, arXiv:1303.6739v1, March 27, 2013. (Thanks to investigator Vaughn Tan for bringing this to our attention.) The authors, at Kazakh National University and the Fesenkov Astrophysical Institute, both in Almaty, Republic of Kazakhstan, explain:

“It has been repeatedly proposed to expand the scope for SETI, and one of the suggested alternatives to radio is the biological media. Genomic DNA is already used on Earth to store non-biological information. Though smaller in capacity, but stronger in noise immunity is the genetic code. The code is a flexible mapping between codons and amino acids, and this flexibility allows modifying the code artificially. But once fixed, the code might stay unchanged over cosmological timescales. Thus, it represents a reliable storage for an intelligent signature, if that conforms to biological and thermodynamic requirements. As the actual scenario for the origin of terrestrial life is far from being settled, the proposal that it might have been seeded intentionally cannot be ruled out. A statistically strong signal in the genetic code is then a testable consequence of such scenario. Here we show that the terrestrial code displays a thorough precision orderliness matching the criteria to be considered an informational signal. Simple arrangements of the code reveal an ensemble of arithmetical and ideographical patterns of the same symbolic language. Accurate and systematic, these underlying patterns appear as a product of precision logic and nontrivial computing rather than of stochastic processes. The patterns are profound to the extent that the code mapping itself is uniquely deduced from their algebraic representation. The signal displays readily recognizable hallmarks of artificiality. Besides, extraction of the signal involves logically straightforward but abstract operations, making the patterns essentially irreducible to any natural origin. Plausible way of embedding the signal into the code and possible interpretation of its content are discussed. Overall, while the code is nearly optimized biologically, its limited capacity is used extremely efficiently to store non-biological information.” 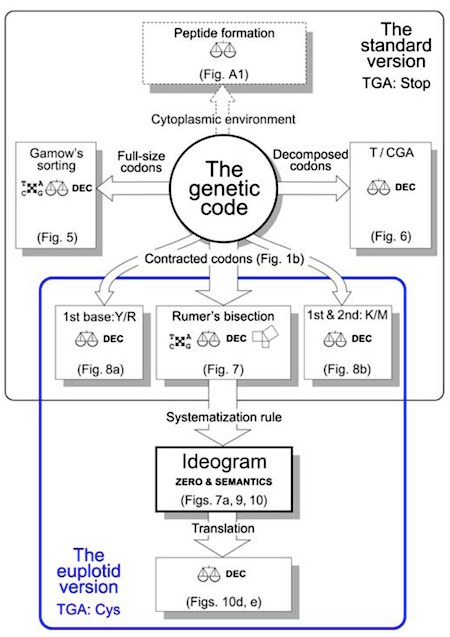 BONUS: The further such adventures of Vladimir shCherbak .