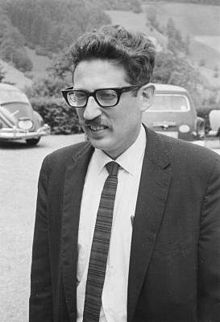 “He is the ‘k’ in G. W. Peck, a pseudonym for a group of six mathematicians,” says Wikipedia, which goes on to say:

Kleitman has coauthored at least six papers with Erdős, giving him an Erdős number of 1. He was a math advisor and extra for the film Good Will Hunting.[5]

Since Minnie Driver of Good Will Hunting appeared in Sleepers with Kevin Bacon, Kleitman has a Bacon number of 2. Adding the two numbers results in an Erdős–Bacon number of 3, the lowest currently known.[6]

He’s also the author of “My Career in the Movies,” about his involvement in Matt Damon and Ben Affleck‘s [Ben (movie) Affleck, not Ben (cement) Affleck] film “Good Will Hunting”:

My Career in the Movies

One day this spring I got a phone call from someone asking if I would talk to two young men who were writing a screenplay for a movie. I made an appointment with them, and they appeared in my office. They told me the movie was about a young guy they had originally envisioned being a genius in physics, but after talking with Sheldon Glashow of Harvard they had decided his being a mathematician was more plausible….

Here’s a math scene from the movie: