Earle Spamer of the American Philosophical Society has, over the years, written a series of Improbable Research reports about the Grand Canyon (beginning with his explanation of how to preserve the Grand Canyon from disappearing due to erosion — his solution: fill the canyon, at least temporarily, with plastic packing “peanuts“). In “Is the Grand Canyon a Fake?“, published in the March-April 2006 issue of the magazine, Spamer wrote:

In America, 43 states have at least one Grand Canyon. Seventy three nations boast a Grand Canyon or two. There are Grand Canyons in the bottoms of oceans, too. Nevertheless, only a small number of the world’s Grand Canyons are recognized by agencies of geographic nomenclature, such as the U.S. Board of Geographic Names and the National Imagery and Mapping Agency. This still did not stop a few geographically challenged writers and bureaucrats from misplacing Arizona’s canyon altogether, calling it the “Grand Canyon of New Mexico,” “Nevada’s Grand Canyon,” and “Colorado’s Grand Canyon.” The Colorado transplant was sensationally replicated by the U.S. Postal Service in 1999 when they produced a full run of postage stamps portraying “Grand Canyon, Colorado.” All 100 million stamps were then destroyed. 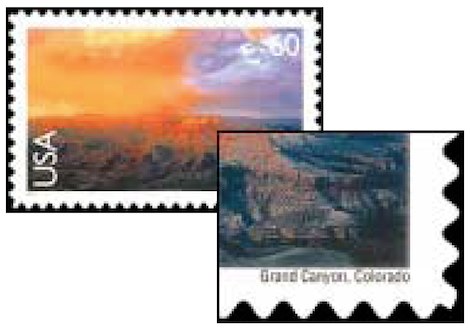 The May 20, 1999 document “Review of the Printing Error in the Grand Canyon Stamp (RG-LA-99-001)” explains that stamp error, from the point of view of postal managers. The fuzzy images of the stamp shown here are reproduced from that report.

Google Maps recently gave all of us the ability to take a virtual wander through the most celebrated of the Grand Canyons. We urge you to do so, to see if you can spot any stray packing peanuts that someone (probably not Spamer himself) may have deposited there: