German soldiers who regularly and thoroughly perform drills with rifles are at risk of developing one big breast, warns this medical study. The danger arises specifically from “mechanical impact of the carbine against the left side of the body during rifle drills”. The study is:

Background: We found a high incidence of patients with gynecomastia in the German Ministry of Defense Guard Battalion in Berlin….

Methods: Within six years, a total of 211 patients underwent surgery for gynecomastia. We compared this group of patients with a control group of healthy males without signs or symptoms of gynecomastia. The two groups were matched for median age.

Results: … there was a highly significant correlation between left-sided gynecomastia and membership in the Guard Battalion.

Conclusions: We found differences in hormone blood levels between gynecomastia patients and a control group. Moreover, gynecomastia was predominantly seen on the left side in guard soldiers. A possible explanation is the mechanical impact of the carbine against the left side of the body during rifle drills. 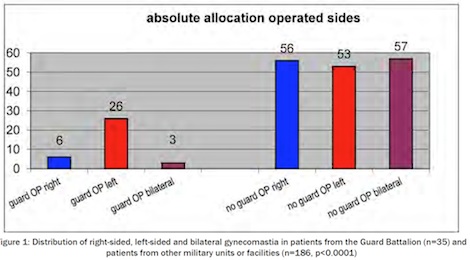 (Emphatic thanks to investigator James Harkin for bringing this to our attention.)