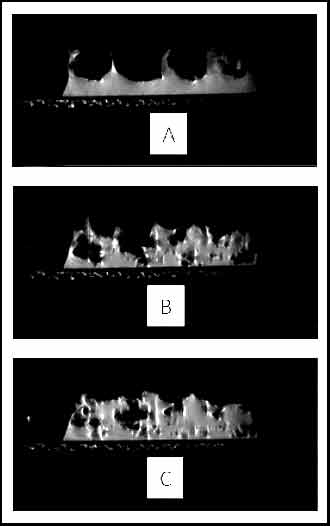 Only a handful (or less) of scientific investigators have ever utilised MRI techniques to track hydration in milky breakfast cereals.But a team of experimenters from Madrid (in collaboration with Nestlé, Switzerland) have done just that. They were working on the basis that :

“When they are soaked in milk, they may present lost [sic] of crispness and organoleptics which are undesirable characteristics for consumers.”

To investigate, various types of cereals (with milk) were scanned by a Bruker BIOSPEC 47/40 spectrometer, operating at 200 MHz (like this one).

“MRI experiments were made in 2D Proton Density-weighed, Rapid Acquisition with Relaxation Enhancement (RARE) sequences, targeted at obtaining 15 slices from each image during 60 minutes, every 120 seconds and during 30 minutes, every 60 seconds, depending on the sample.”

“According to the rehydration level, no advisable clustering behavior was found. Nevertheless, some differences were noticeable between the coating, the type of milk and the variety of cereals.”

BONUS: A look back: the 1995 Ig Nobel Physics Prize was awarded to D.M.R. Georget, R. Parker, and A.C. Smith, of the Institute of Food Research, Norwich, England, for their rigorous analysis of soggy breakfast cereal, published in the report entitled “A Study of the Effects of Water Content on the Compaction Behaviour of Breakfast Cereal Flakes,” published in Powder Technology, November, 1994, vol. 81, no. 2, pp. 189-96.