It was back in 1844 that the Victorian poet and satirist James Payn wrote : 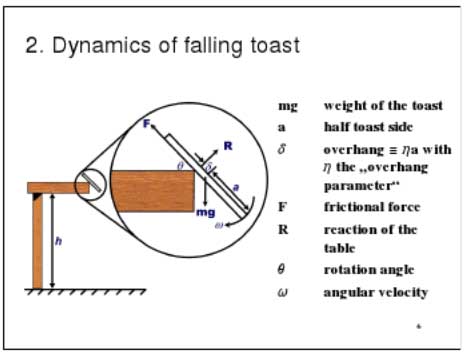 “I’ve never had a piece of toast
particularly long and wide,
but fell upon a sanded floor,
and always on the buttered-side.”

Depending on whether you are an optimist or a pessimist this poetic generalisation may or may not resonate with your standpoint. Either way, the mathematics of the ‘Tumbling toast problem’ have recently come under the scrutiny of professor Riccardo Borghi of the Dipartimento di Elettronica Applicata, Università degli Studi ‘Roma Tre’, Rome, Italy.

In the European Journal of Physics, Volume 33 Number 5, September 2012, the professor points out that :

“The numerical solution of the related Newton’s equations has been found in the space domain, without resorting to the complete time-based law of motion, with a considerable reduction of the mathematical complexity of the problem. This could allow the effect of the different physical mechanisms ruling the overall dynamics to be appreciated in a more transparent way, even by undergraduates.”

See: On the tumbling toast problem (yours for $33.00, plus taxes if applicable).

The illustration above is from an earlier inquiry into a very similar subject authored by Roland Krenn, Institute of Physics, Strong Interactions in continuum QFT, Karl Franzens Universität Graz, Austria. Available here, free of charge. ‘The Anthropomurphic principle’.

BONUS: The 1996 Ig Nobel Prize in physics was awarded to Robert Matthews of Aston University, England, for his studies of Murphy’s Law, and especially for demonstrating that toast often falls on the buttered side. [REFERENCE: “Tumbling toast, Murphy’s Law and the fundamental constants,” “European Journal of Physics,” vol.16, no.4, July 18, 1995, p. 172-6.] In this video, Robert Matthews shows and tells the tale of the toast: