Perhaps the first formal study of transplanting beavers by airplane and parachute appeared slightly more than six decades ago:

“Transplanting Beavers by Airplane and Parachute,” Elmo W. Heter, Journal of Wildlife  Management, vol. 14, no. 2, April 1950, pp. 143-7.  The Atlantic did a nice piece about it, as did The Daily Planet. The author, at the Idaho Fish and Game Department,  McCall, Idaho, reports:

“The best altitude for launching is between 500 and 800 feet. This height assures sufficient time for the ‘chute to set the box down gently. Yet, it is low enough for accuracy in placing the box in the selected meadow, and to avoid trees or other obstacles in which the ‘chute and box might become entangled.

“Satisfactory experiments with dummy weights having been completed, one old male beaver, whom we fondly named ‘Geronimo,’ was dropped again and again on the flying field. Each time he scrambled out of the box, someone was on hand to pick him up. Poor fellow! He finally became resigned, and as soon as we approached him, would crawl back into his box ready to go aloft again.”

The image below, from the study, shows the box in which the beaver rode. 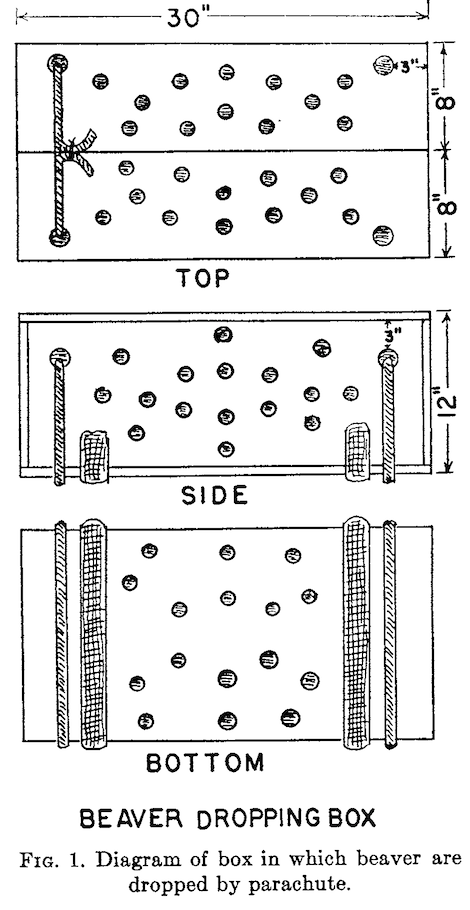 (Thanks to Dan Eastwood for bringing this to our attention.)

BONUS: Patent for another box by Elmo Heater, designed for a different kind of task.

BONUS (unrelated): “Go Parachuting Near Beaver! Are you ready to jump out of an airplane high above Beaver?”

BONUS: The project that parachuted dead mice to a new home.