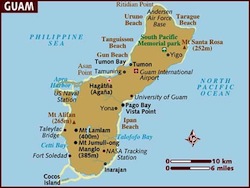 If you’re going to lace dead mice with poison, and drop them from helicopters into a rainforest in Guam in such a way that they become entangled high in the trees where they might murder the brown tree snakes, but you want to avoid (as much as possible) having the toxically tasty mouse corpses fall all the way to the ground, where they could instead get gobbled by coconut crabs, perhaps you should graft them on to something like a parachute.

Peter Savarie, Tom Mathies and Kathleen Fagerstone, of the National Wildlife Research Center in Fort Collins, Colorado, did just that. At a symposium in 2007, they told all about it in a report called Flotation Materials for Aerial Delivery of Acetaminophen Toxic Baits to Brown Treesnakes….

BONUS: A video news report about the project: