Tom Egan of Costa Mesa California invented an indoor sundial, which works by redirecting the sunlight. The photo, diagram, and result-trace below show how it works. Egan published a detailed description in The Compendium [the journal of the North American Sundial Society], vol. 19, no, 3, September 2012. The synopsis version of that says the device is:

a novel indoor sundial using an externally mounted convex mirror to compress the entire visual arc of the sky down to the size of the mirror. A pinhole in a mask on the window acts as a camera obscura, projecting the image of the sun onto an indoor dial face that can be as small as a letter-size piece of paper. The system has four parts: A convex mirror mounted just above the roof line; a pinhole lens affixed to the window; and two paired flat mirrors to relay the sun beam from the convex mirror through the pinhole and onto the dial face inside the building. 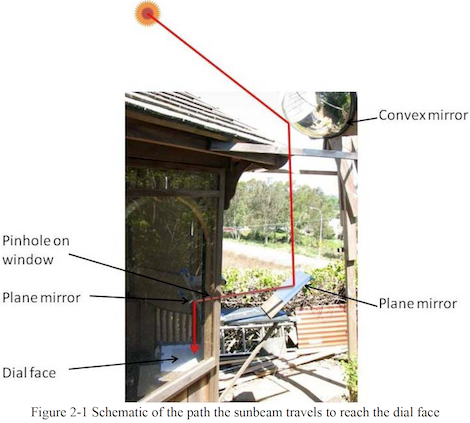 BONUS: Others have invented, as jokes, reverse indoor sundials, which work by providing their own light source which rotates around a fixed dial. One is the Saddletrout Studio indoor sundial, pictured here:

Another is the Noddystuff Secondlife indoor sundial, pictured here: 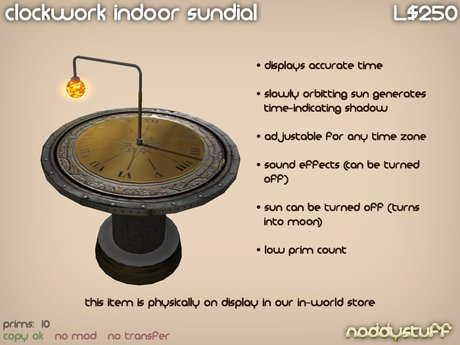 Another, not at all for purists, is the three-light-source Bulbdial clock, pictured here: 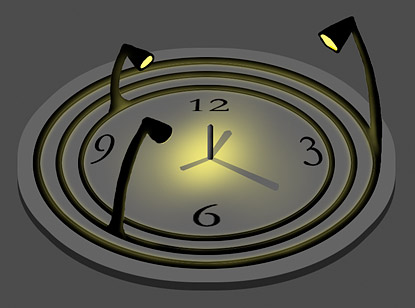 BONUS: Tom Egan says that Isaac Newton, too, experimented with an indoor sundial:

“A further variety of sun-dials are those called reflective. In the numbers of “Aunt Judy’s Magazine” for March and April, 1878, there is a charming account of how Sir Isaac Newton placed a mirror on the floor of his room which reflected the sun’s rays on to the ceiling, upon which the hour lines were traced.”

Isaac Newton developed a convenient and inexpensive sundial, in which a small mirror is placed on the sill of a south-facing window.[47] The mirror acts like a nodus, casting a single spot of light on the ceiling. Depending on the geographical latitude and time of year, the light-spot follows a conic section, such as the hyperbolae of the pelikonon. If the mirror is parallel to the Earth’s equator, and the ceiling is horizontal, then the resulting angles are those of a conventional horizontal sundial. Using the ceiling as a sundial surface exploits unused space, and the dial may be large enough to be very accurate.