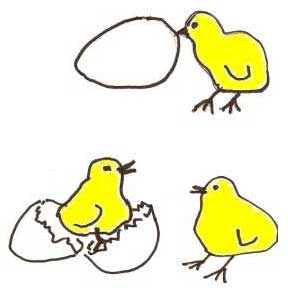 Dr. Dainis Zeps, a Senior Researcher at the Institute of Mathematics and Computer Science of the University of Latvia, is one of the very few to have investigated “hierarchical multitime notion and of the cone of creation” with reference to CERN’s Large Hadron Collider.

His paper on the subject, ‘On to What Effect LHC Experiment Should Arrive’ (Prespacetime Journal, March 2010, Vol. 1, Issue 2, pp. 244-251) attempts to clarify some of the highly complex implications of a possible Higgs Field by use of a ‘Chicken and Egg’ diagram [above].

“What is what in the picture of two chickens? The chicken in the first picture is the physicist before LHC experiments. He is trying Higgs bosonic field with his beak, i.e., LHC. Smashing it, he finds inside it himself, i.e., the world behind Higgs field is the same world, but rather in the new, hierarchical multitime setting. How to picture the fact that chicken’s consciousness has been changed, author did not invent. It must be imagined or lived over by ourselves.”