The Forum is where Dan Lehman writes about the birth of the New Knot Claims Assessment Committee of the International Guild of Knot Tyers:

In response to the issue raised in km57:57 and in various KM Letters, most notably that from Roger Miles [km58:12], the Council has approved the formation of a committee of the IGKT to handle the initial validation of new knot claims.  Guild Member Dan Lehman, who made the proposal to the Council, has been appointed as its chairman. This committee is named “New Knots Claims Assessment Committee (NKCAC)”; its purpose is to receive, review, and give technical opinion on claims by members and others:  that a knot is unknown in knot literature and is valid in terms of performance.

One obvious relief as I saw it was the removal of such Is-it-New? queries from KM when in many cases the answer was clear.  (E.g., one fellow, as did I ca. ’73, “invented” the Marlinespike hitch — no benefit to having KM pages carry such a claim or question, and then the answer(s).  The Perfection/Anglers Loop has appeared more than once there; and some other, single bowline-in-the-bights have been repeatedly presented.) Beyond that, our “assessment” was hoped to put a candidate novelty through some pulling & testing and various-materials checking….

BONUS: The Guild created a not not knot-delightful illustrated chart of knots, in PDF form, which they generously make available, free, to anyone who might find it useful. Here is one of the knots from the chart. It’s a back splice – 3 strand rope, drawn by the prolific, multi-talented Percy W. Blandford: 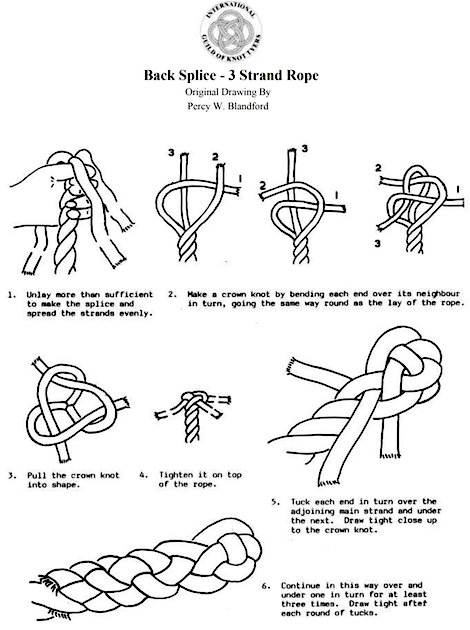 BONUS: A discussion of Knots on Mars (Thanks to Charlie Niles for bringing it to our attention.)