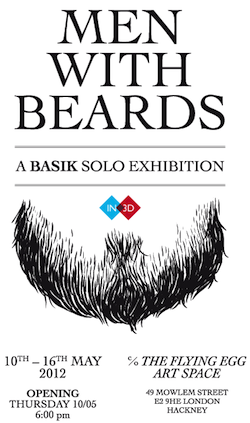 Not being a barber, and not having had an adulthood that spanned 130 years, Dwight E Robinson was in no position to report firsthand the frequency of changes in relative prevalence of sideburns, moustaches and beards in London during the years 1842-1972. He used an indirect source: issues of the Illustrated London News published during that time.

Robinson, a business professor at the University of Washington, in Seattle, gathered his findings about those findings into a study that he called Fashions in Shaving and Trimming of the Beard: The Men of the Illustrated London News, 1842-1972. It was published not in Britain but in the American Journal of Sociology, in 1976.

Robinson used and, he says, improved upon a general analytic technique pioneered by Jane Richardson and AL Kroeber, who in 1940 “measured annual fluctuations in width and length of skirts, waistlines and decolletage as ratios to women’s heights“…

BONUS [quasi-related]: The image here, a poster advertising an exhibition in London in May 2012, demonstrates the city’s abiding interest in the growth and decline and regrowth of facial hair.