The June 1998 issue of Agricultural Research magazine included this report about exploding meat: 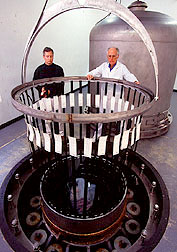 Solomon is with USDA’s Agricultural Research Service, and Long is retired from the Lawrence Livermore National Laboratory in San Francisco, California….

They needed someone willing to take risks. And this person had to believe in Hydrodyne’s potential.

In Virginia, they found Eric Staton, who was with a company called Air Power, Inc. He was licensed and trained to use explosives, the agent that would create the shock waves in the process.

A Peacetime Use for Explosives

Throughout John Long’s career as a mechanical engineer, he worked with explosives at Lawrence Livermore. His mission: preparing the Nation’s defense. He always wondered if the explosives he studied could be used for peaceful ends–like tenderizing meat. Then, after more than 10 years of retirement and long after the Cold War’s end, he began pursuing the Hydrodyne concept in earnest.