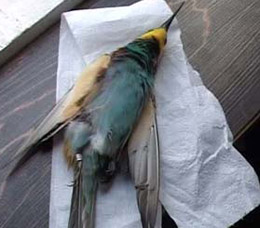 Spying birds get smaller and more sophisticated. Last year a vulture (Gyps fulvus) made the news after it was caught in Saudi Arabia, wearing a GPS-transmitter marked ‘Tel Aviv University’ and last week, the BBC reports, an other alleged Israeli spy was found dead near the town of Gaziantep in southern Turkey. The bird, an European bee-eater (Merops apiaster) had caught the attention of locals because it was wearing a ring around its leg with the inscription ‘Israel Tel Aviv’ and the (spy)number C43917. More importantly the bee-eaters left nostril was much larger than the other and ‘big enough to hide spy equipment’.

The dead bird was handed over to the Gaziantep Provincial Directorate of Agriculture and Livestock Animal Health Division Director Akif Aslanpay, who noticed the bee-eaters left nostril was indeed larger than the other and therefore alerted the national security agency. Later the dead bird was declared to be not a spy.

‘The Handbook of the Birds of the Western Palearctic‘ does not give any statistics on nostril size in Merops apiaster, but mentions: ‘Short bristle-like feathers at gape and side of bill, almost covering nostril’.