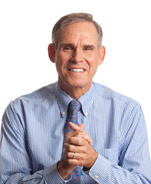 We received a strange direct message (on Twitter) from Dr. Eric Topol [pictured here], who—to all appearances—was lead author on a study that lists (approximately) 976 co-authors. Dr. Topol sent the message specifically to say that he is not a co-author of that study. The study is: 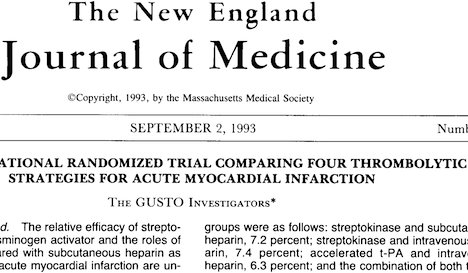 The 1993 Ig Nobel Prize in literature was awarded to Eric Topol, R. Califf, F. Van de Werf, P. W. Armstrong, and their 972 co-authors, for publishing that study, which has one hundred times as many authors as pages. You can download a copy of the paper and see the entire list of what appear to be co-authors. As you can see, the paper lists  “The GUSTO Investigators” as author, with a star next to the three-word phrase. The final three pages of the paper list—in tiny type—all the people who, together, are the GUSTO investigators. The first name is “Dr. E. Topol”, who is identified as “Study Chairman”: 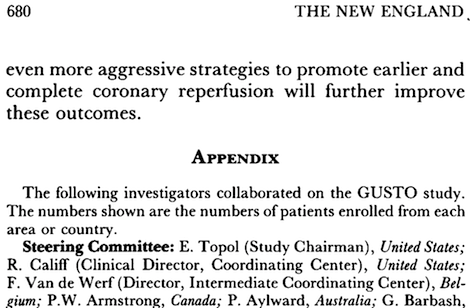 The study’s first page says “Address reprint requests to Dr. Eric Topol”, gives his (then) address, and also says, “Dr. Topol, as chairman of the study, assumes full responsibility for the overall content and integrity of the manuscript”: 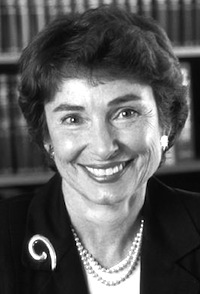 Dr. Topol has a new book out, which he is promoting heavily on Twitter. He has received much press attention, including a mention in his local newspaper, the San Diego Union-Tribune. Possibly spurred by that mention (but who, besides Dr. Topol, can say for sure?), he sent us this message:

(Eric Topol @EricTopol:)     The only author of the NEJM paper was “The GUSTO Investigators” and the researchers were listed in the appendix. you’re off-base, not funny

The New England Journal‘s executive editor, Dr. Marcia Angell [pictured here] (who later became its editor in chief), came to the 1993 Ig Nobel ceremony and gleefully accepted custody of the prize on behalf of all those co-authors — one of whom now says he is not a co-author.