Jason Torchinsky of Jalopnik interviewed Dr. Peter Snyder [pictured here], VP of Research at Rhode Island Hospital and co-author of the study “The Effect of Acute Increase in Urge to Void on Cognitive Function in Healthy Adults“. Dr. Snyder and his team (based partly in Australia, partly in the US) shared the 2011 Ig Nobel Prize in medicine with a European team; all were honored for demonstrating that people make better decisions about some kinds of things — but worse decisions about other kinds of things — when they have a strong urge to urinate.. 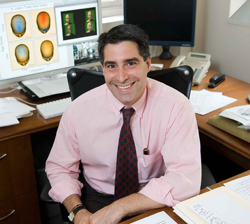 The interview, under the headline “Why Having To Pee While Driving Is As Bad As Drinking“, says, in part:

Jalopnik: Would you be an advocate of an in-car urination system of some type? Should it be mandatory or an option? And, if it was an option, would you get one on a new car you’d purchase?

Dr. Snyder: If my kids were still a little younger, I’d seriously consider it. I think for myself, I’d rather pull over. But with kids, it would beat having to stop every half hour.

Jalopnik: So you don’t keep an emergency urine bottle in the car?

Dr. Snyder: No, but since I published this study, and after I won the Ig Nobel award, I can’t believe how many people told me they do just that. I did a radio interview in Seattle, and several truck drivers called in and told me how much they study resonated with them and that they keep bottles in the car for just that purpose.

Jalopnik: Any plans to continue the research and do a more driving focused study?

Dr. Snyder: You know, that is interesting, and I very well may have a student for whom I’d suggest this as a focus.