John Levi Martin [pictured here], sociologist at the University of Chicago offers his “Reflections on Sociology as a science“: 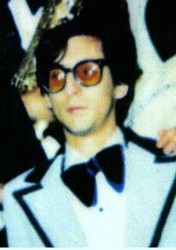 I am often asked to give my opinion as to whether and how sociology should be a science, provoking the following reflections on science as an enterprise. Basically, I have to say that science has let me down. At first I was very enthusiastic about it – I liked the shiny surfaces and the big dials and that thing that looks like a tee-vee antenna but sends the electric arcs up and helps wake up Frankenstein. So I was willing to overlook science’s mis-steps, like the drum machine, the tamagochi, and the hydrogen bomb….

Some of my colleagues argue that statistics are a part of science for which we should be grateful. But the part of statistics that has served us best is the asterisk, and I find that science’s role here has been distinctly tangential.

The asterisk, we are told, was a printer’s invention to succinctly indicate the year of birth of a personage. The most common explanation is that it represents the “star” (Latin, “asterix”) under which a person was born; an alternate derivation is that it represents the butthole (Latin, “asterix”)… Sociologists adopted it to indicate statistical significance because it is like a little firework of joy: *. Ka-boom! Another publication!

In contrast, the symbol for almost-significant-but-not-quite is the ‡ which represents the dagger carried by every Roman senator (also, confusingly, called the “asterix”) that he would stab into his own heart if he turned out to be in a play by Shakespeare that had to come to a quick end because King John had to run to the bathroom… Science may indeed have invented statistical significance, as my colleagues assure me it did, and I do admit that this was a gift to sociology. But then it also invented marginal statistical significance, and that cancels out the other. Add the hydrogen bomb and you see where I am coming from.