A study in New Zealand tested the tearing of knickers, and found that meaningful results are not easy to obtain if one examines only the fabric itself:

“Tearing of Knicker Fabrics,” T.J. Dann, D.J. Carr, R.M. Laing, B.E. Niven and  J. Kieser, Forensic Science International, 217 (2012) 93–100. (Thanks to investigator Erwin Kompanje for bringing this to our attention.) The authors, at the University of Otago, report:

“In Dunedin (South Island, New Zealand), a sexual assault is reported to police approximately once every two to three weeks, with some reports fictitious. Identifying a fictitious claim is difficult, and damage to apparel, especially knickers, may be the only form of evidence….

“The aim of this work was to investigate (i) the tearing behaviour of fabrics commonly used to manufacture knickers available in New Zealand, (ii) the effect of laundering on tearing fabrics, and (iii) the appearance of damage caused by tearing….

“Torn fibre ends appeared similar to those damaged by other means (e.g. knife, screwdriver) and no features visible underfield emission scanning electron microscope could be attributed solely to tearing damage in the fabrics studied.”

Detail from the report—a photo of the machine used to do the testing: 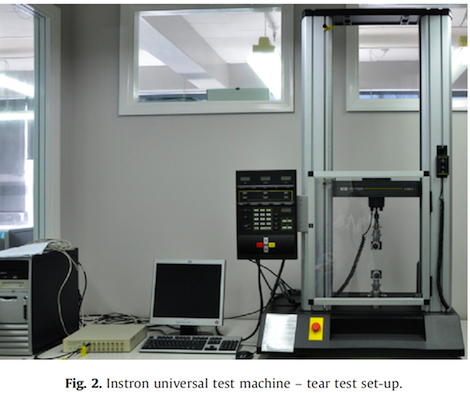