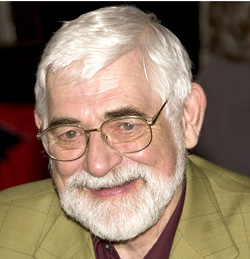 “East is east and west is west“, a simple statement, does not logically exclude the possibility that east is also west and that west is also east. Geoffrey Leech [pictured here] makes part of the case, politely, in his study:

“Politeness: Is there an East-West divide?” Geoffrey Leech, Journal of Politeness Research. Language, Behaviour, Culture, vol. 3, no. 2, July 2001, pp. 167–206. The author, at Lancashire University, UK (of whom the journal informs us that “He has recently lectured on politeness in China, Japan, Korea and other countries”) explains:

“Is there an East-West divide in politeness?This article presents… a Grand Strategy of Politeness (GSP)… The following hypothesis will be put forward, and supported by evidence from four languages: that the GSP provides a very general explanation for communicative politeness phenomena in Eastern languages such as Chinese, Japanese and Korean, as well as in Western languages such as English…. [This] article argues in favour of the conclusion that, despite manifest differences, there is no East-West divide in politeness.”