How does part of the brain respond when you stuff kids with ice cream over a long period of time and then offer them an ice-cream-filled milkshake? This is the first study to involve a scientist named Burger who investigates that question in the particular way that this study goes about it (Thanks to investigator Gus Rancatore for bringing it to our attention.):

Objective: We tested the hypothesis that frequent ice cream consumption would be associated with reduced activation in rewardrelated brain regions (eg, striatum) in response to receipt of an ice cream–based milkshake and examined the inﬂuence of adipose tissue and the speciﬁcity of this relation.

The study presents these pretty pictures, which may in some way pertain to something: 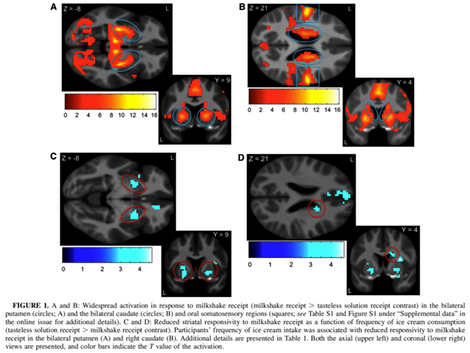 BONUS: Dr. Cassius Bordelon of Baylor College of Medicine explains his own, unrelated insights into brains and ice cream:

BONUS: Investigator Tony Tweedale alerts us to the existence of another, perhaps equally fine study, described in a press release: “What Kind of Chocolate Is Best? The Last You Taste, Says a New Study“. Here is a link to the study itself; the study’s publisher believes you may be willing to pay US $35 to see the details. Without receiving your $35, they are willing, on that web page, to show you only the study’s title: “Saving the Last for Best: A Positivity Bias for End Experiences”.

UPDATE (March 5, 2012):  The Daily Telegraph gives its interpretation of this study: “Ice cream as ‘addictive as drugs’ says new study” (Thanks to investigator Scott Langill for bringing this to our attention.)