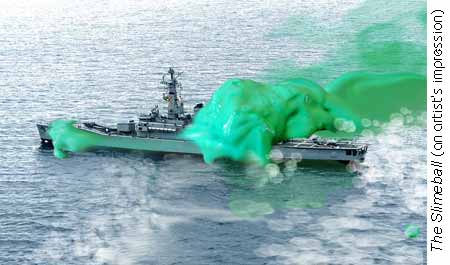 Here’s more about The Slimeball:

Shaving foam and baby diapers might not be the first key components to spring to mind if you were tasked with developing a gargantuan Non Lethal Weapon (NLW) for use against enemy warships.
But spring they did, however, to the mind of Lieutenant Commander Daniel L. Whitehurst of the United States Navy –  for he describes just such a weapon in a 2009 research report originating from the Air Command And Staff College, Air University, Maxwell Air Force Base, Alabama. (“The Intellectual and Leadership Center of the Air Force.”)

That weapon is ‘The Slimeball’

“In terms of feasibility, advisability, deliverability, and applicability, the Slimeball can offer new and possibly vital options to decision makers in pursuit of our national interests.”

– explains the author, and goes on to outline how it works.

“’The Slimeball,’ consists of a sticky foam-based floating surface barrier that resists efforts to remove it, paired with a chemical gel that restricts movement below the surface.”

First, here are the details of the foamy part :

“The primary component of such a material would contain properties commonly found in shaving cream, due to its deliverability in a compressed state and high expansive capacity, estimated to be up to 850 percent of its compressed volume.”

But, readers may be wondering, how could such an ephemeral bubbly material persist for any substantial time in seawater? For, as the author himself notes:

“As commercially formulated, shaving cream is too insubstantial to create more than a nuisance to vessels.”

The solution to this puzzle was elusive until inspiration arrived from an unlikely source:

“When in doubt, consult a doctor. Doctor Seuss, that is. In his book ‘Bartholomew and the Oobleck’ a kingdom finds itself swamped and unable to function after it is inundated with a green, persistent, sticky slime.”

“Oobleck’s primary characteristic, of getting thicker and more viscous when stressed, falls into the non-Newtonian category of rheopectic fluids, and this seemed to be a step towards solving the problem.”

And, moving on, to implement the underwater component of The Slimeball – the author suggests a material called (PAM), a commercially-available flocculating agent that forms a semi-solid gel in the presence of water.

“This material is widely available for numerous commercial applications from waste management to horticulture to baby diapers.”

Thus The Slimeball takes shape – but when, where and under what circumstances could The Slimeball be successfully deployed? Unusually perhaps for an unclassified document, the author names three ‘proposed targets’ for Slimeball.

Suggesting that the ‘element of surprise’ might not be a very  important factor for the deployment of  Slimeball. Either way, given ongoing global tensions, could we see the The Slimeball in action before long? –  maybe, for example’ in the strait of Hormuz? The author believes it may be deemed appropriate:

“The cumulative effects of multiple 1,000 pound Slimeball warheads [] if accurately placed, could cover much if not all of the harbor entrances with between 5 and 8 weapons.”

The full slimy details are available here from the Air University
: The Slimeball: The Development of Broad-Scale Maritime Non-Lethal Weaponry