Slime would become the US military’s prime weapon to immobilise large ships under a scheme outlined for the US Air Force’s Air Command and Staff College. Lieutenant Commander Daniel Whitehurst, a student at the college, figured out how to combine a raft of existing technologies to produce the officially “non-lethal” armament he calls The Slimeball. He prepared a report in 2009. “The Slimeball,” Whitehurst writes, “is a two-part weapon system consisting of a floating sticky foam barrier that will resist attempts to remove it, and a submerged gel barrier that will impede movement through a ship channel. The parts can also be used independently of each other”.

Whitehurst gives three examples of targets well suited for Slimeball’s gooey power. He explains how to use it against pirates in Boossaaso, Somalia; against the Iranian navy near the city of Bandar Abbas in the Strait of Hormuz; and against China’s underground submarine base at Sanya, on Hainan Island…. 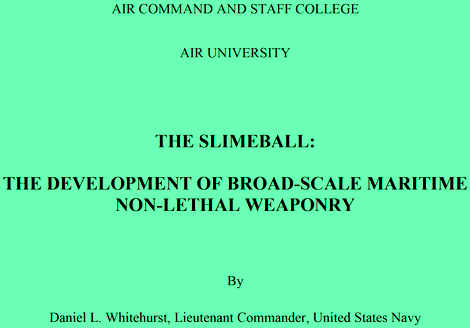