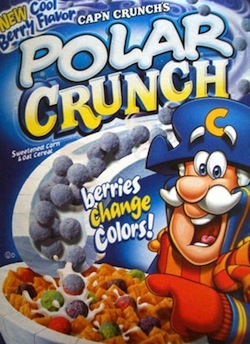 When parents warn children not to play with their food, there’s now reason to add a menacing “even if”: “even if the food begins playing with you”. Recently, food was given a new ability to play, a little, the moment it encounters milk.

Researchers have patented a way to make breakfast cereal change colour as it sits in the bowl, awaiting its roller-coaster ride down somebody’s throat.

The patent documents explain why the world needs this to occur, as well as how, chemically and mechanically, to do it.

Hideo Tomomatsu of Crystal Lake, Illinois, filed a patent application in 1987 for what he called “colour-changing cereals”. Eight years later, Joseph Farinella of Chicago, Illinois, and Justin French of Cedars, Iowa, used much of the same stilted wording in filing their own application. Both patents were granted, with the rights being assigned to the Quaker Oats Company….