“A highly contagious behavioural affliction is now endemic in highland areas of Scotland. Pretravel advice ought to include a health warning to sport-lovers venturing north into wild, highlands of Gaeldom. It particularly affects young adults and predominates in men, although women are affected. The disorder can be acute or chronic and when severe, it can threaten one’s life and limbs. Acute attacks may bring spontaneous recovery in months, but the chronic state can last for a life-time. Death will overtake some before it runs its inevitable course.” 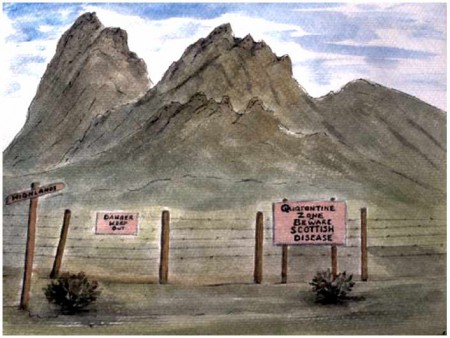 Symptoms range from apparently mindless wandering (mimicking early dementia) to snow-blindness. And there can be acute side effects such as bruises, sprains and even broken bones.

A cure remains elusive, but meanwhile, as a preventative measure, Dr. McIntosh recommends the implementation of a quarantine exclusion zone covering all mountainous areas north of a line from Stonehaven to Helensburgh.  (See illustration above.)

Non subscribers to the SMJ can examine the disorder in detail here for US$30.00. But for our readers who are determined to stick with the free abstract, Improbable can reveal that the disorder may be related to ‘Munro Bagging‘- a currently active trend in hillwalking which produces a craving in those afflicted – an almost irresistible desire to climb all Scottish mountains over 3,000 feet. The so-called Munros. According to official figures from the Scottish Mountaineering Club, there are 283 Munros (and 227 further subsidiary tops). Those (sufferers) who are driven to complete the task in its entirety are known as ‘Compleaters’.