What happens when a firefly meets a superconducting magnet? That depends, of course, on the details. Here’s one documented, flashy course of events: 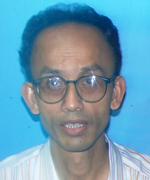 “Here we present in vivo flashes from male specimens of three species of fireflies—two Japanese species Luciola cruciata, Luciola lateralis and one Indian species Luciola praeusta—positioned under a superconducting magnet. When the OFF state of the firefly becomes long after flashing in an immobile state under the strong static magnetic field of strength 10 Tesla for a long time, which varies widely from species to species as well as from specimen to specimen, the effect of the field becomes noticeable. The flashes in general are more rapid, and occasionally overlap to produce broad compound flashes. We present the broadest flashes recorded to date, and propose that the strong static magnetic field affects the neural activities of fireflies, especially those in the spent up or ‘exhausted’ condition.”

(Thanks to investigator Maxwell Zeigler for bringing this to our attention.)