Lamb castration is not always the idyllic pastime that some people may think it is. The Centers for Disease Control issued the following alert:

“On June 29, 2011, the Wyoming Department of Health was notified of two laboratory-confirmed cases of Campylobacter jejuni enteritis among persons working at a local sheep ranch. During June, two men had reported onset of symptoms compatible with campylobacteriosis. Both patients had diarrhea, and one also had abdominal cramps, fever, nausea, and vomiting. One patient was hospitalized for 1 day. Both patients recovered without sequelae. During June, both patients had participated in a multiday event to castrate and dock tails of 1,600 lambs. Both men reported having used their teeth to castrate some of the lambs. 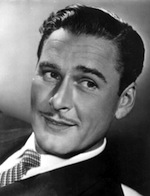 Among the 12 persons who participated in the event, the patients are the only two known to have used their teeth to castrate lambs.”

BONUS: Investigator Steve Mirsky informs us that movie star Errol Flynn [pictured here] engaged in the practice, and that Flynn proudly described it years later, in his autobiography, My Wicked, Wicked Ways: The Autobiography of Errol Flynn. Here is the relevant passage: