A fresh heap of rumors say that soon, soon scientists at the CERN particle accelerator will announce that they have discovered evidence that the Higgs boson exists. Or that it doesn’t. Or that they evidence doesn’t quite prove the one or the other. 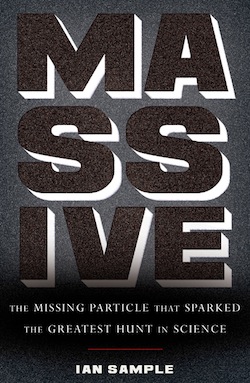 Ian Sample, science editor of The Guardian, wrote a surprisingly-fun-and-fact-filled book, called Massive, about the search for this possible particle. In anticipation of whatever the announcement is, he asked quite a few prominent physicists to answer the question “Is the Higgs boson real?”

In presenting their answers, Sample writes, “Here are the physicists’ responses, in no particular order”. That statement is a lie. The order is, obviously, carefully chosen. Here are its first two items:

“They said when the collider goes on
Soon they’d see that elusive boson
Very soon we shall hear
Whether Cern finds it this year
But it’s something I won’t bet very much on.”

“The Higgs mechanism for generating masses is extremely attractive and has no real competition. Beyond that there’s little certainty. A near-minimal implementation of supersymmetry, perhaps augmented with ultra-weakly interacting particles, is the prettiest possibility. So I’d like several Higgs particles, Higgsinos, some ghostly stuff, and a pony.”
[Note: A Higgsino is a supersymmetric partner of a Higgs boson].