This is what Evgeny Morozov wrote (we have merely added some links to pertinent parts of it, and some images): 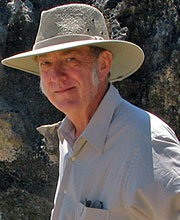 The first paragraph of Matt Cartmill [pictured here]’s review of Donna Haraway’s Primate Visions book. It appeared in the International Journal of Primatology (Vol. 12, No. 1, 1991)

This is a book that contradicts itself a hundred times; but that is not a criticism of it, because its author thinks contradictions are a sign of intellectual ferment and vitality. This is a book that systematically distorts and selects historical evidence; but that is not a criticism, because its author thinks that all interpretations are biased, and she regards it as her duty to pick and choose her facts to favor her own brand of politics.

This is a book full of vaporous, French-intellectual prose that makes Teilhard de Chardin sound like Ernest Hemingway by comparison; but that is not a criticism, because the author likes that sort of prose and has taken lessons in how to write it, and she thinks that plain, homely speech is part of a conspiracy to oppress the poor. 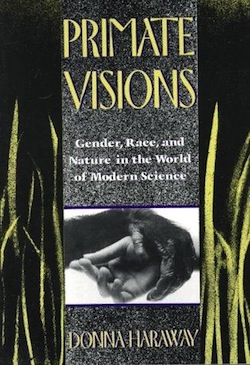 This is a book that clatters around in a dark closet of irrelevancies for 450 pages before it bumps accidentally into its index and stops; but that is not a criticism, either, because its author finds it gratifying and refreshing to bang unrelated facts together as a rebuke to stuffy minds. This book infuriated me; but that is not a defect in it, because it is supposed to infuriate people like me, and the author would have been happier still if I had blown out an artery. In short, this book is flawless, because all its deficiencies are deliberate products of art. Given its assumptions, there is nothing here to criticize. The only course open to a reviewer who dislikes this book as much as I do is to question its author’s fundamental assumptions—which are big-ticket items involving the nature and relationships of language, knowledge, and science.

Donna Haraway’s influence is felt widely in cultural studies, women’s studies, political theory, primatology, literature and philosophy. Donna Haraway’s prolific publications are required reading across the humanities and social sciences. In Primate Visions: Race and Nature in the World of Modern Science (1990) she combines literary theory, political philosophy, primatology, and American history to explore the world of primatology, which has become a largely woman-dominated field.

DOUBLE BONUS: A big chunk (58 pages, more or less) of Primate Visions is online in the form of a downloadable PDF.