A new line of American-British research suggests that the shape of a chief executive officer’s head can indicate how well his firm will prosper. The shape also predicts whether the chief executive will act immorally.

The research offers a mathematical tool that financial analysts can add to their professional kit bag: the chief executive officer’s facial width-to-height ratio. The “chief executive facial WHR”, for short.

The research and its financial implications are outlined in a study called A Face Only an Investor Could Love: Chief Executive Facial Structure Predicts Firm Financial Performance, to be published in the journal Psychological Science. 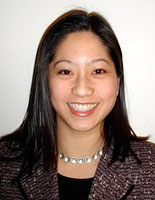 The authors, Elaine Wong [pictured here] and Michael Haselhuhn at the University of Wisconsin-Milwaukee, and Margaret Ormiston at London Business School, explain the significance of their work. Prior researchers, they say, failed “to empirically identify physical traits that predict leadership success” or predict “the ability of leaders to achieve organisational goals”….

BONUS: The American Psychological Association, which will publish the CEO study, issued a press release that finishes with this warning: “Don’t run out and invest in wide-faced CEOs’ companies, though. Wong and her colleagues also found that the way the top management team thinks, as reflected in their writings, can get in the way of this effect. Teams that take a simplistic view of the world, in which everything is black and white, are thought to be more deferential to authority; in these companies, the CEO’s face shape is more important. It’s less important in companies where the top managers see the world more in shades of gray.”