Deutsche Welle interviews Mirjam Tuk about the 2011 Ig Nobel Prize in medicine, which she and her colleagues in Europe shared with an unrelated group in Australia and the US. Here’s the beginning of the interview (and click here for audio):

Deutsche Welle: You are one of this year’s winners of the Ig Nobel prize and you are the lead author on this paper, “Inhibitory Spillover: Increased Urination Urgency Facilitates Impulse Control in Unrelated Domains.” What does this mean? 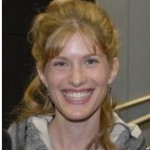 Mirjam Tuk: That means as people are controlling their bladder to a large extent, so if they have to go to the toilet more urgently, that facilitates impulse control in other domains. So, for example: That means they become more patient with money, they are better able to wait for a later, but larger reward, instead of the more impulsive, more immediate reward. And they can also control other, more cognitive, automatic impulses.

So in other words, when people have an urgent need to use the toilet, they at the same time urge better self-control in other areas?

Does that ability to make less impulsive decisions extend outside of these conditions?

Of course all human beings are able to control themselves. But that depends on the environmental characteristics. When we are hungry, we become more impulsive. And as my research shows, when we control our bladder to a large extent, we become slightly less impulsive. This shows one of the very many determinants for our ability to exert self-control… [read the entire interview]