Russian science has a tradition of observing naked swimmers. Several years ago we documented Yuri Glebovich Aleyev’s project (which he documented in a book called Nekton). He used an electric winch to tow naked women under water at speeds of two to four metres per second, to better understand how dolphins interact with water. (His logic may not be fully apparent to you from the skimpy description here, Read the article.)

More recently, the Daily Mail newspaper (which has a curiously mixed history when covering science) published photos and descriptions of another Russian project: 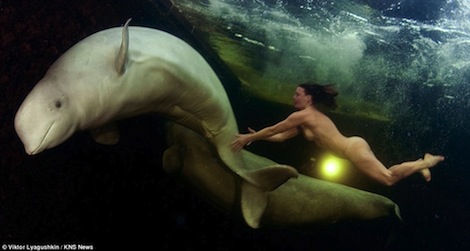 Braving sub-zero temperatures, she has thrown caution — and her clothes — to the wind to tame two beluga whales in a unique and controversial experiment. Natalia Avseenko, 36, was persuaded to strip naked as marine experts believe belugas do not like to be touched by artificial materials such as diving suits. The skilled Russian diver took the plunge as the water temperature hit minus 1.5 degrees Centigrade.

(Thanks to investigator and Ig Nobel Prize winner Magnus Wahlberg for alerting us to the recent project, and investigator Frank Fish for the earlier one.)