The Daily Mail (a news source that inspires literary scholars to speak whimsically about the concept of the “unreliable narrator“) features a story about some colorful photos [one of which is reproduced here]. The story says:

Father of three Mohamed Babu set up the photographs after his wife, Shameem, showed him some ants had turned white after drinking spilt milk.

He gave the creatures the brightly coloured sugar drops and watched as their transparent stomachs matched the food they were eating. 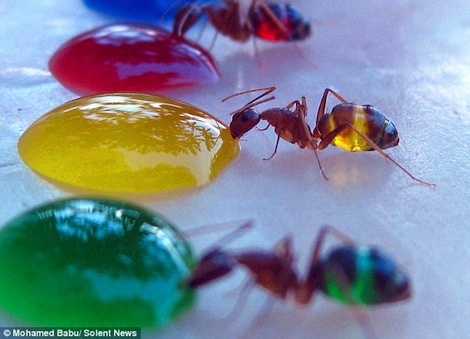 (Thanks to investigator Josh Kroll for bringing this to our attention.)

BONUS: A comparison of the major British newspapers: