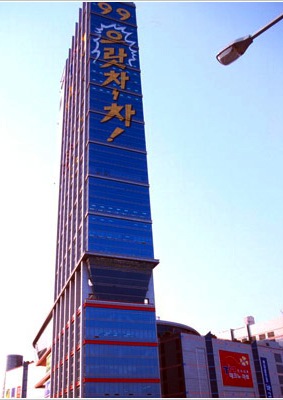 Resonance is a simple physics concept (which can be expressed in lovely mathematics). Two Korean news reports tell about a recent example:

A form of aerobic exercise performed by dozens of people caused the vertical vibration felt in certain floors at Techno-Mart, a 39-story shopping mall in Gwangjin-gu, Seoul, two weeks ago, an inspection committee tentatively concluded Tuesday. A simulation of the exercise was carried out on the 12th floor of the fitness center of the building Tuesday by inspectors to prove that the group exercise caused the building to vibrate. The same number of people, 23, as was there at the time of the shaking on July 5, participated in the simulation exercise….

The mystery of what made a Seoul residential-commercial high-rise complex shake for 10 minutes, like in an earthquake, has been solved, according to its owner. The cause, according to TechnoMart owner Prime Group, was 17 middle-aged people in a 12th floor fitness center performing Tae Bo exercises, a mixture of boxing and taekwondo that became popular in the 1990s. And to prove it, Prime Group will stage a demonstration today to show that a bunch of middle-aged people exercising can shake a 39-story skyscraper…

BONUS: A radio report about the incident.

BONUS: Another example of resonance in a structure: The Tacoma bridge.